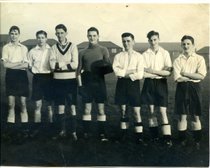 Formation
The origins of Prestwich Heys A.F.C. can be traced back to February 9th 1938 when a meeting was called at the Music Room of the Heys Road Boys School at which Elgar Lumsden put forward the idea of forming an Old Boys Association.

Attending that first meeting were messers Bridge, Stott, Foster, Taplin and Alan Proctor Bell, who was to become a central figure in the Club's history and whose progress he was to report on in the Prestwich Guide under the guise of 'Touchliner'.

Despite the onset of the Second World War a year later, the Association flourished under the Chairmanship of Bell, who also acted as Secretary of the football arm, known as Heys Old Boys AFC and was acknowledged as one of the region's best.

The team went on to win its first honours in 1943 in the Prestwich and Whitefield League with the Woodward Shield - a success which was repeated for the next three seasons.

The Glory Years
The team gradually progressed through the Bury Amateur League and in to the South East Lancashire League claiming Championships in 1960, 1961 and 1964. Under the guidance of Peter Gilmore in the sixties, Heys won the prestigious Lancashire Amateur Cup in 1967 followed by the one and only Lancashire Combination Grand Slam in the 1970/71 season with Heys bringing all four trophies available back to Grimshaws.

The club also changed its name in 1964 to Prestwich Heys AFC, an acknowledgement of the fame achieved by the club as they proved one of the nations top amateur clubs.

Thousands flocked to see Heys play, and beat, the likes of Sutton United, Ferryhill Athletic, Finchley and Highgate United in the FA Amateur Cup with the clubs best run taking Heys to the last 16. The victory over Sutton United in 1969 ranks as one of Heys most famous moments, attracting nationwide coverage, coming a week before their opponents were due to meet Leeds United in the FA Cup.