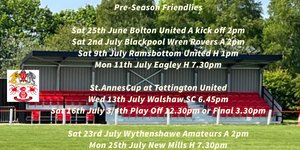 By STEPHEN HOWARD
4 days ago
Share via
FacebookTwitter
https://www.prestwichheys.com/

Heys will begin their pre-season friendly programme at Bolton United on Saturday.

After the originally scheduled fixture at Egerton was cancelled, Bolton, who were last seasons Manchester League DIvision Two Champions, stepped into the breach.

The full pre-season itenary can be seen in the above graphic.